In this chapter we will review assumptions of MLMs and some ways to check them in R.

The learning objectives for this chapter are:

All materials for this chapter are available for download here.

For this data demo, we will use the following packages:

The data for chapter are a subsample from the 1982 High School Beyond data collected by the National Center for Educational Statistics, used as example data throughout Raudenbush, S. W., & Bryk, A. S. (2002). Hierarchical Linear Models: Applications and Data Analysis Methods: SAGE Publications. These data are related to student math achievement.

In brief, the assumptions underlying MLMs are as follows:

In the data demonstration that follows, we will be showing some techniques for checking these assumptions. However, we note that there are many other ways to conduct similar checks. Assumption checks are data exploration at the end of the day. If you know and prefer other methods of exploring the same facets of your data, go for it!

Specifying your model means determining which predictors should be included and what parameters to estimate. A correctly-specified model is one that includes everything associated with your outcome and nothing not-associated. This is impossible to know for certain and most researchers are constrained by the resources they have to get data and, ultimately, by the data they have. A general approach for considering this is trying to include all possible relevant IVs when predicting a DV. We recommend a three step approach. (1) Start with a null model to check the extent of clustering. (2) Run your “core” model, what you expect to be included according to theory. (3) Run a maximal model with all possible random effects, and trim down as you see effects are zero. Comparing models with and without effects and reviewing the literature for important variables to consider are decent strategies here. Get experts to read your results and their ideas on if anything is missing!

The functional form of your model refers to the function connecting your predictors and outcome. In linear models like MLMs, that form is (you guessed it!) linear. However, you can use MLMs for non-linear data by specifying other functions, which are not covered in the current set of modules. In our example data, let’s look at the relationship between an outcome of math achievement (mathach) and a predictor of socioeconomic status (ses). We can get a sense of whether that relationship is linear with a scatterplot: 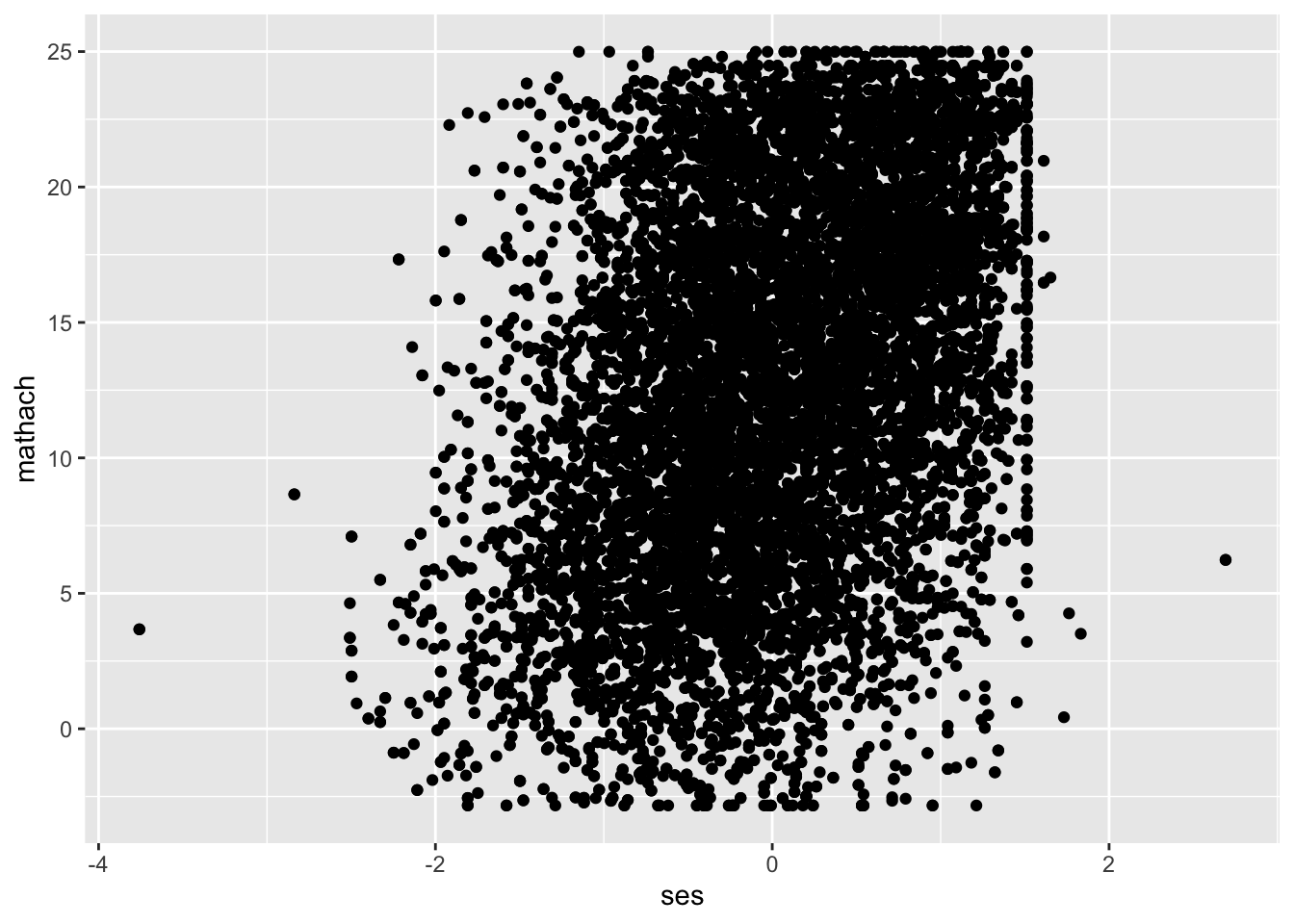 The scatterplot is hard to read because we have over 11,000 observations in our data. One option to improve readability is reducing the opacity of each point to get a clearer picture of how many points there are: 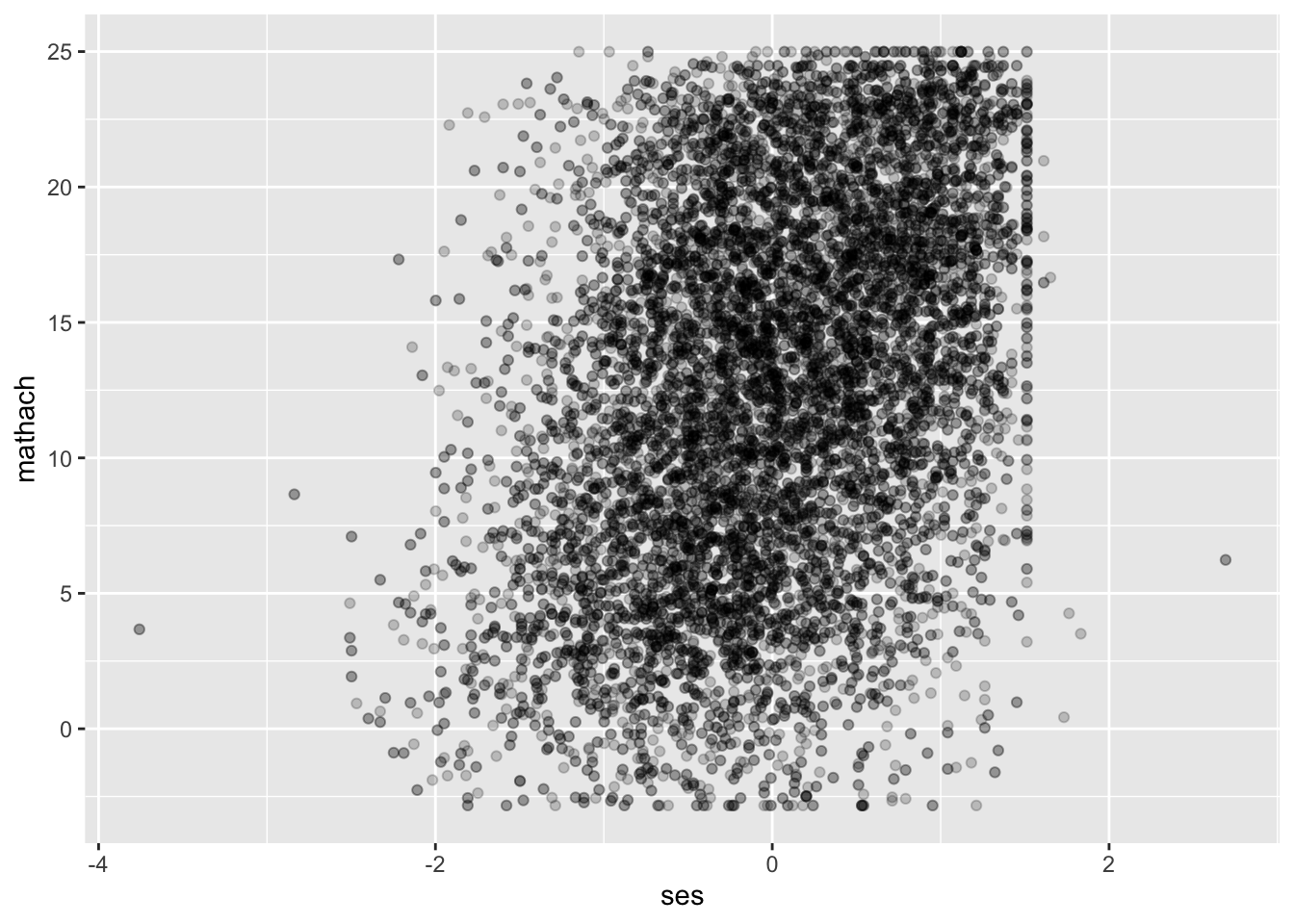 It looks loosely linear. Before we continue, for teaching purposes we’ll take a subset of 30 schools to make plotting easier for the rest of this data demo. For your data, you should consider all observations; this is just to make examples clearer.

Let’s take a look at the relationship between SES and math achievement for each of the 30 schools in our subsetted data.

Looks like we have vaguely linear relationships; nothing looks quadratic. This is a subjective determination, be open to other, non-linear functions if a straight line doesn’t appear to do the job. Finally, let’s graph all points on one plane again but with regression lines overlaid for each school. 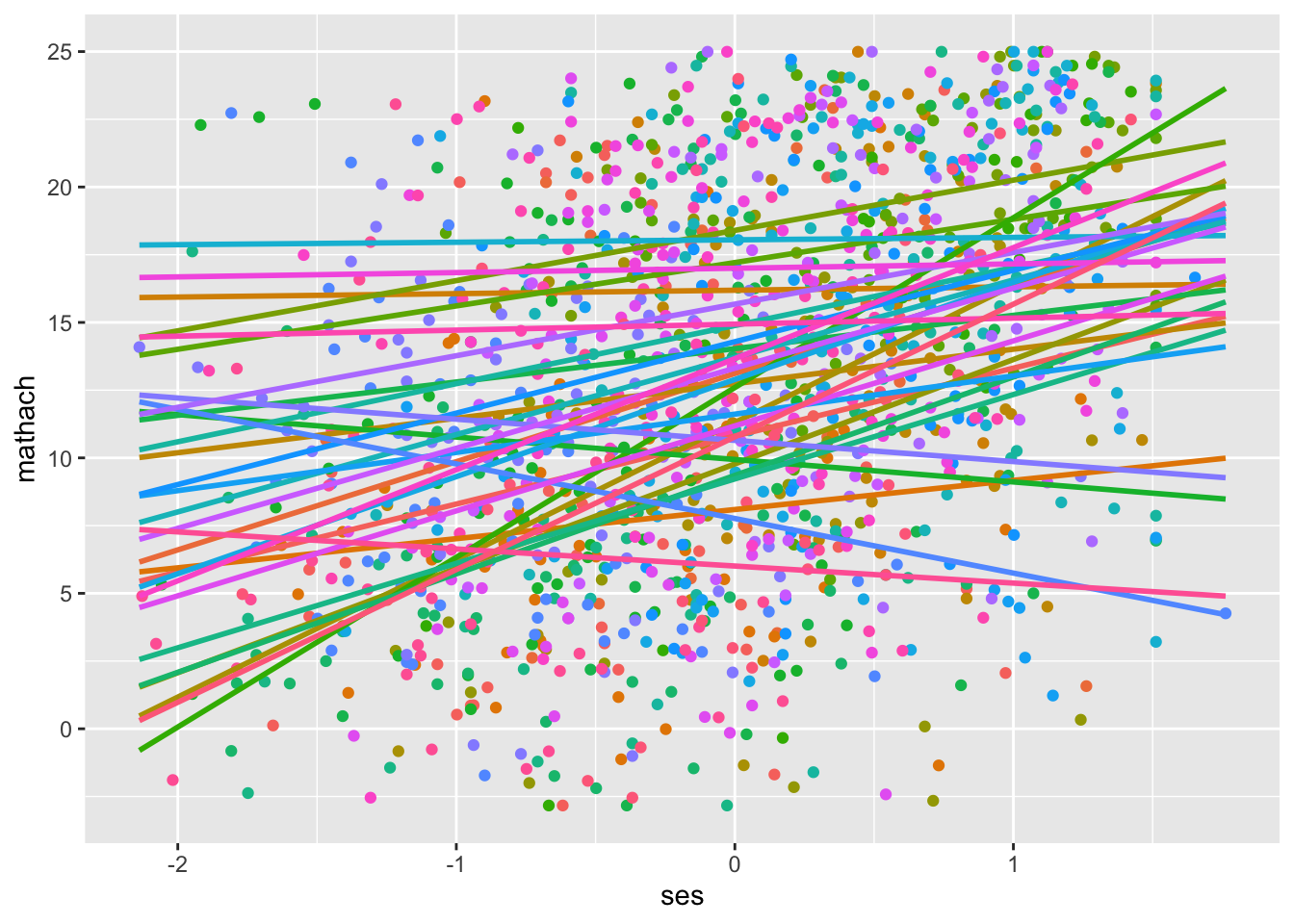 This isn’t an explicit test of functional form, but it looks like there is variance in intercepts and slopes across schools that merits multilevel modelling (or cluster-robust standard errors, if you don’t have any multilevel research questions).

12.2.5 An Aside: Extracting Residuals

In linear regression, we have the assumption of homoscedasticity. That is, the variance of residuals is roughly the same at any value of of your predictor(s). In multilevel models, we have two classes of residuals: level-1 residuals and level-2 residuals. The remaining assumptions all deal with these residuals: that they are normally distributed, that they don’t relate to each other, that they don’t relate to predictors at the same level or at the other level. We’re going to look at a model with math achievement predicted by SES centered within cluster (school) and mean SES predicting the intercept and slope of SES centered within cluster. We’ll estimate a random effect for the slope of SES centered within cluster. We’re not estimating the random effect covariance.

Let’s extract the level-1 residuals and add them to our data to work with moving forward: 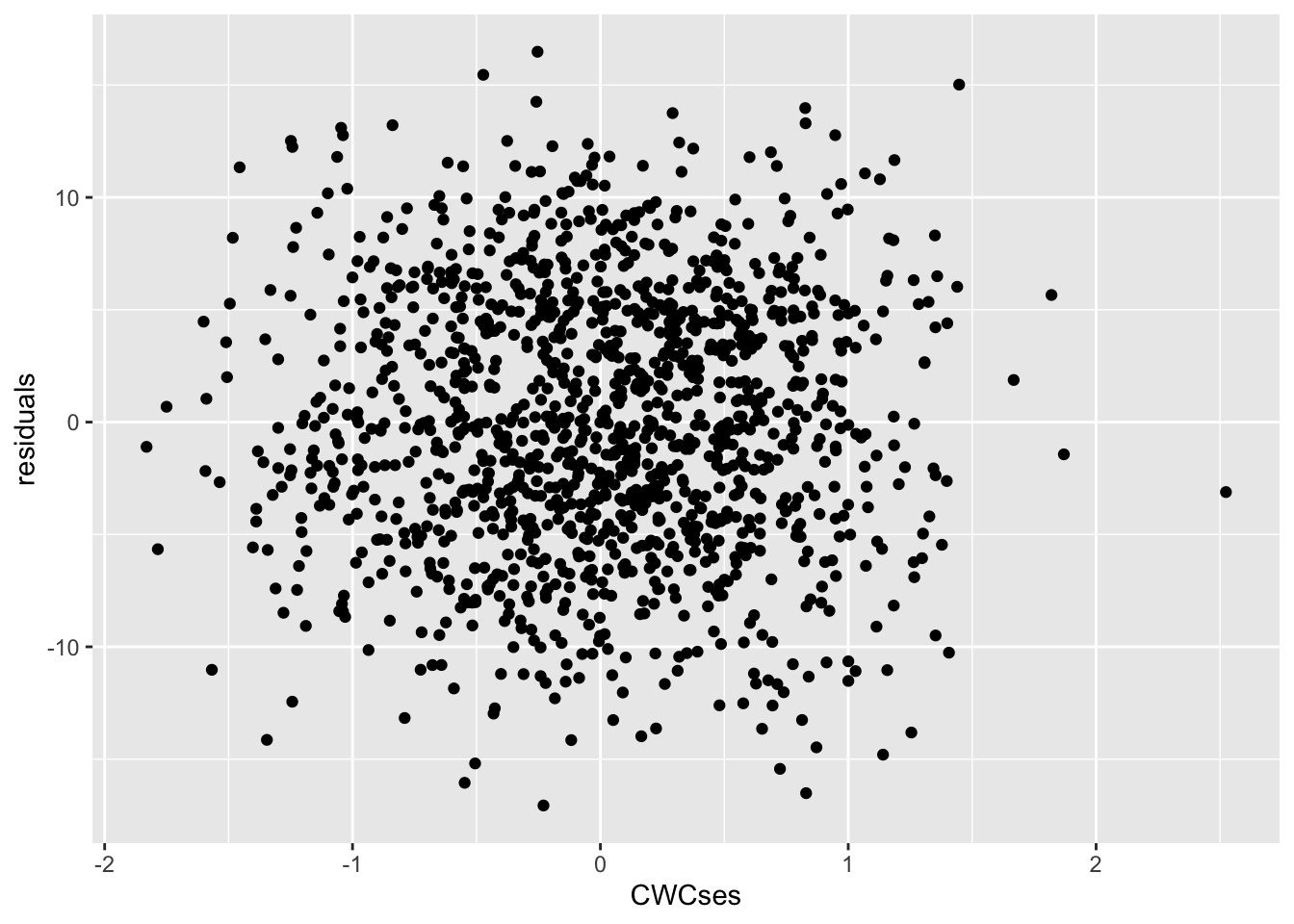 Those don’t look correlated; they look like a blob. We can check this statistically by calculating the correlation.

That correlation is essentially zero, meaning that our level-1 residuals and level-1 predictor are indeed uncorrelated!

We can check whether our level-1 residuals are normally distributed with a histogram: 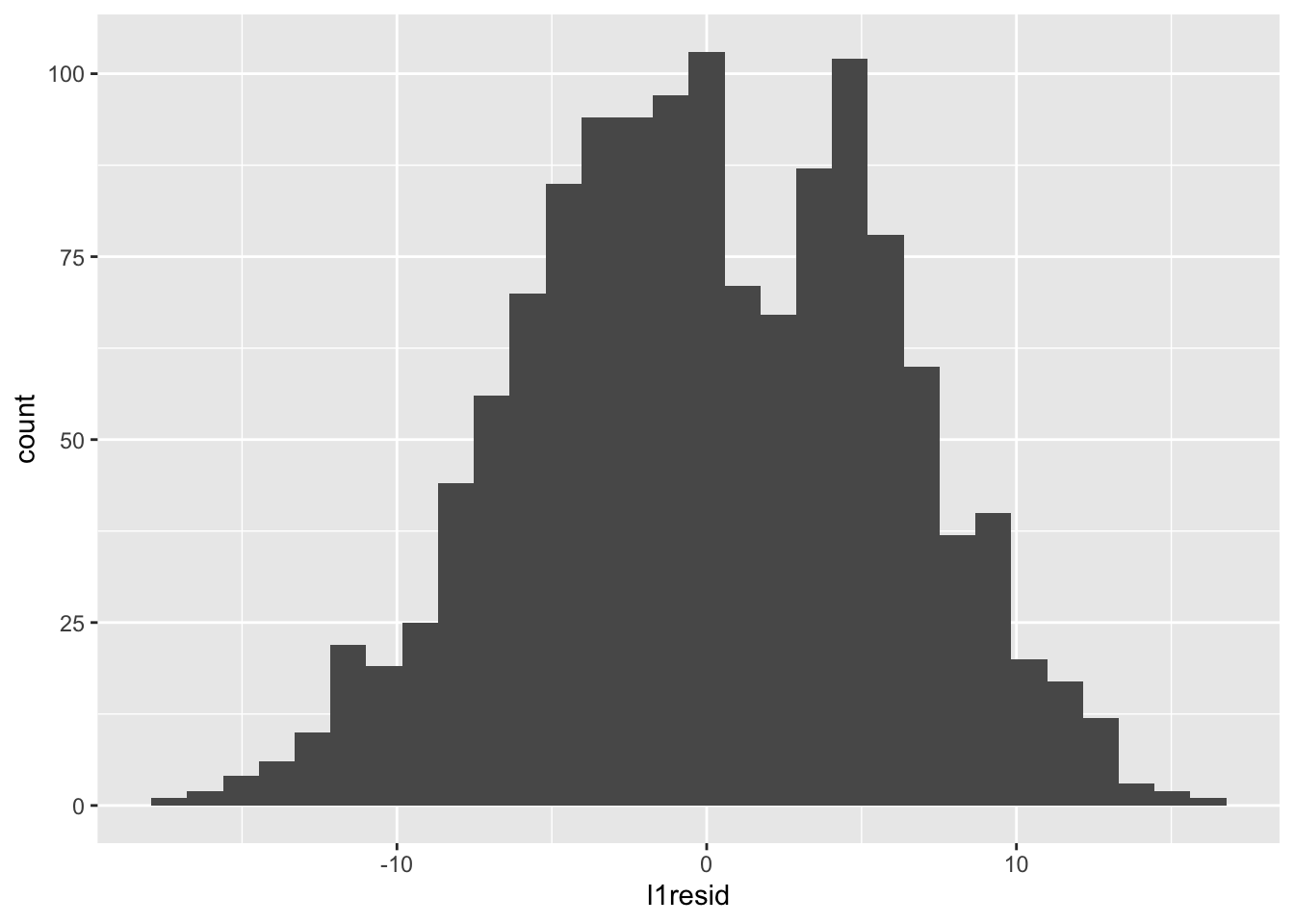 Those look normal-ish — there’s maybe something odd going on in that the distribution is bimodal, but that can be influenced by the number of bins. For example, with fewer bins: 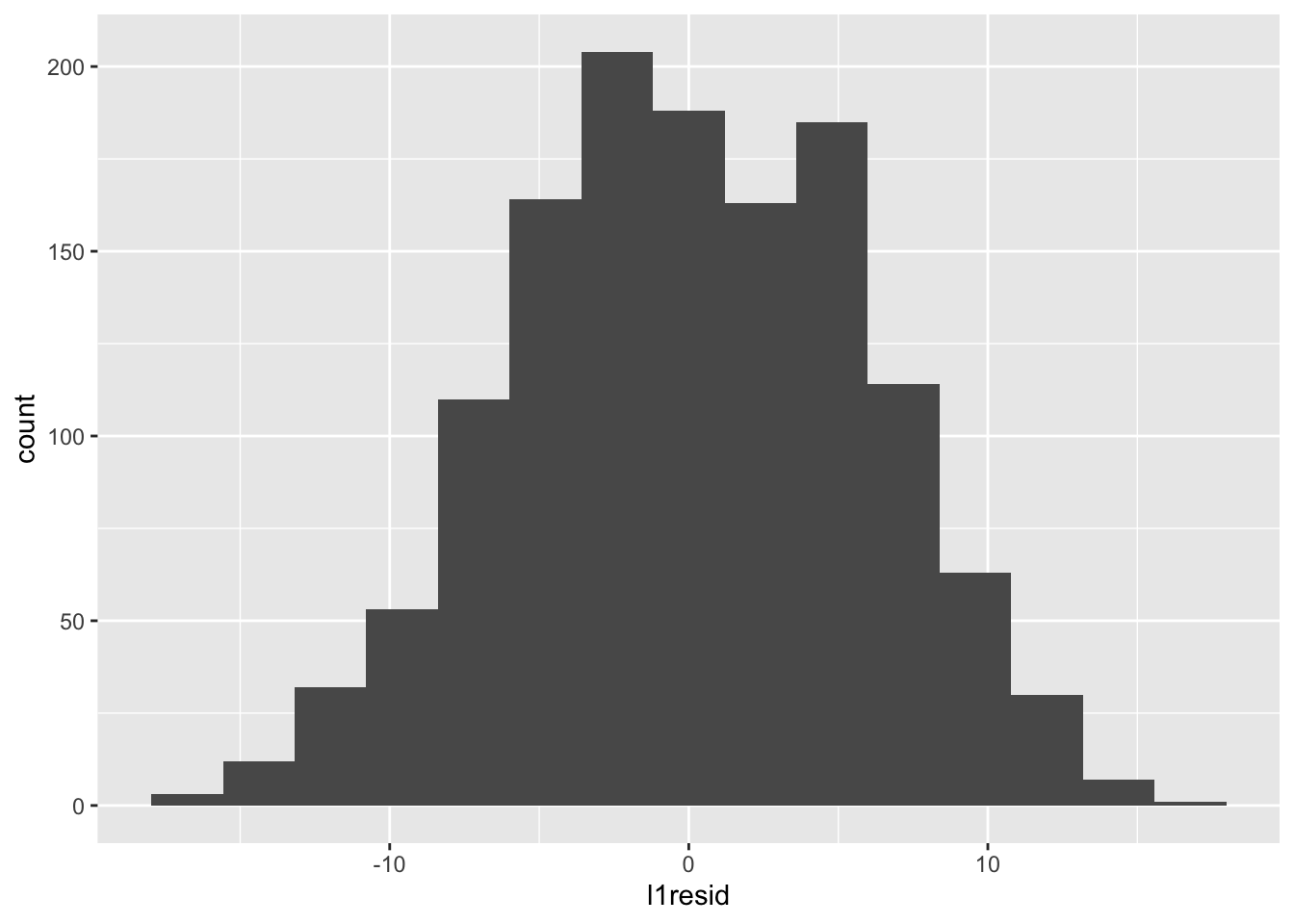 Let’s clear this up with a quantile-quantile (QQ) plot: 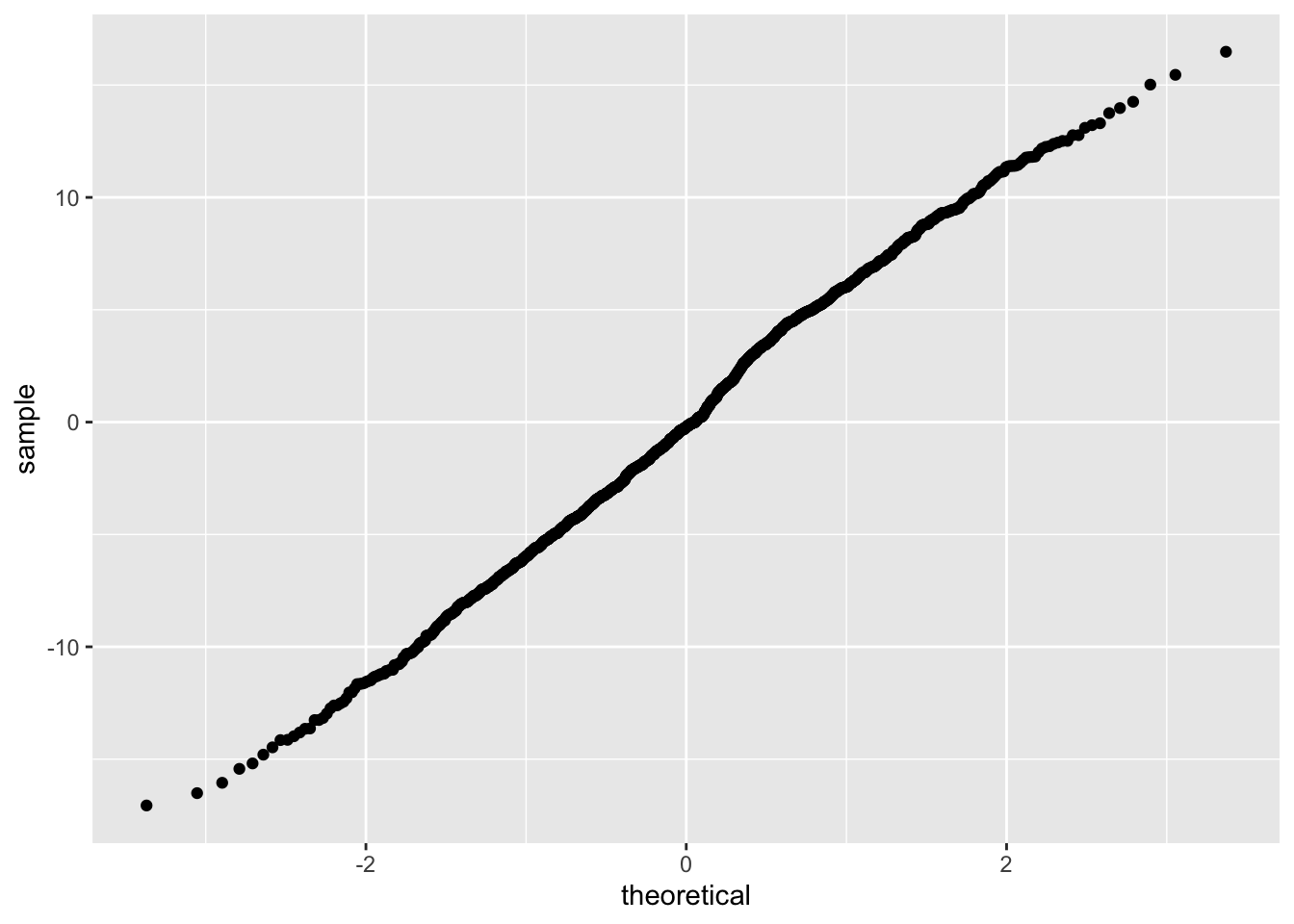 First, let’s look at the relationship between the intercept residuals and the level-2 variable of mean SES. 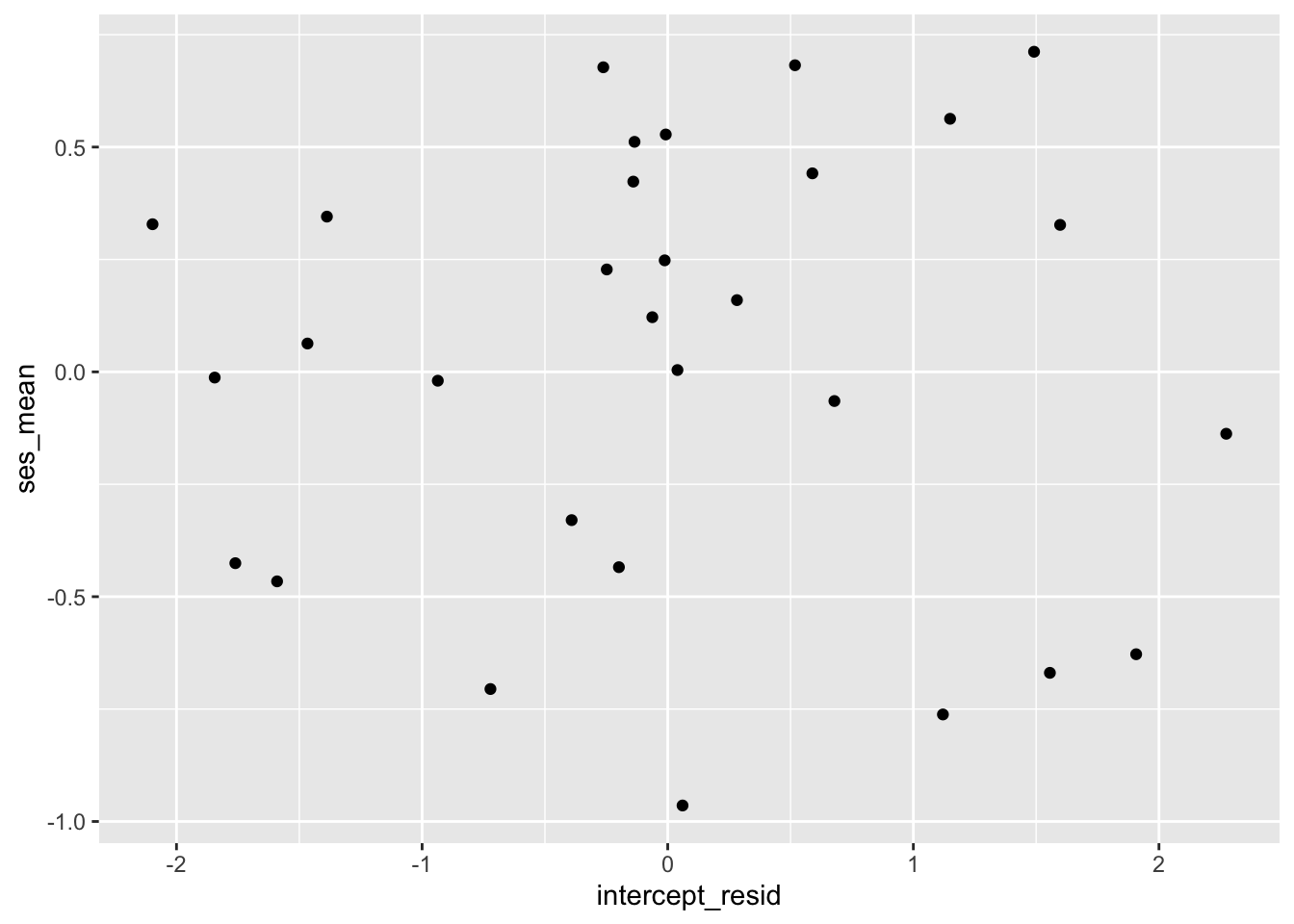 Next, let’s check that the slope residuals are independent from the predictor of mean SES:

Finally, let’s check whether the level-2 residuals are independent of each other: 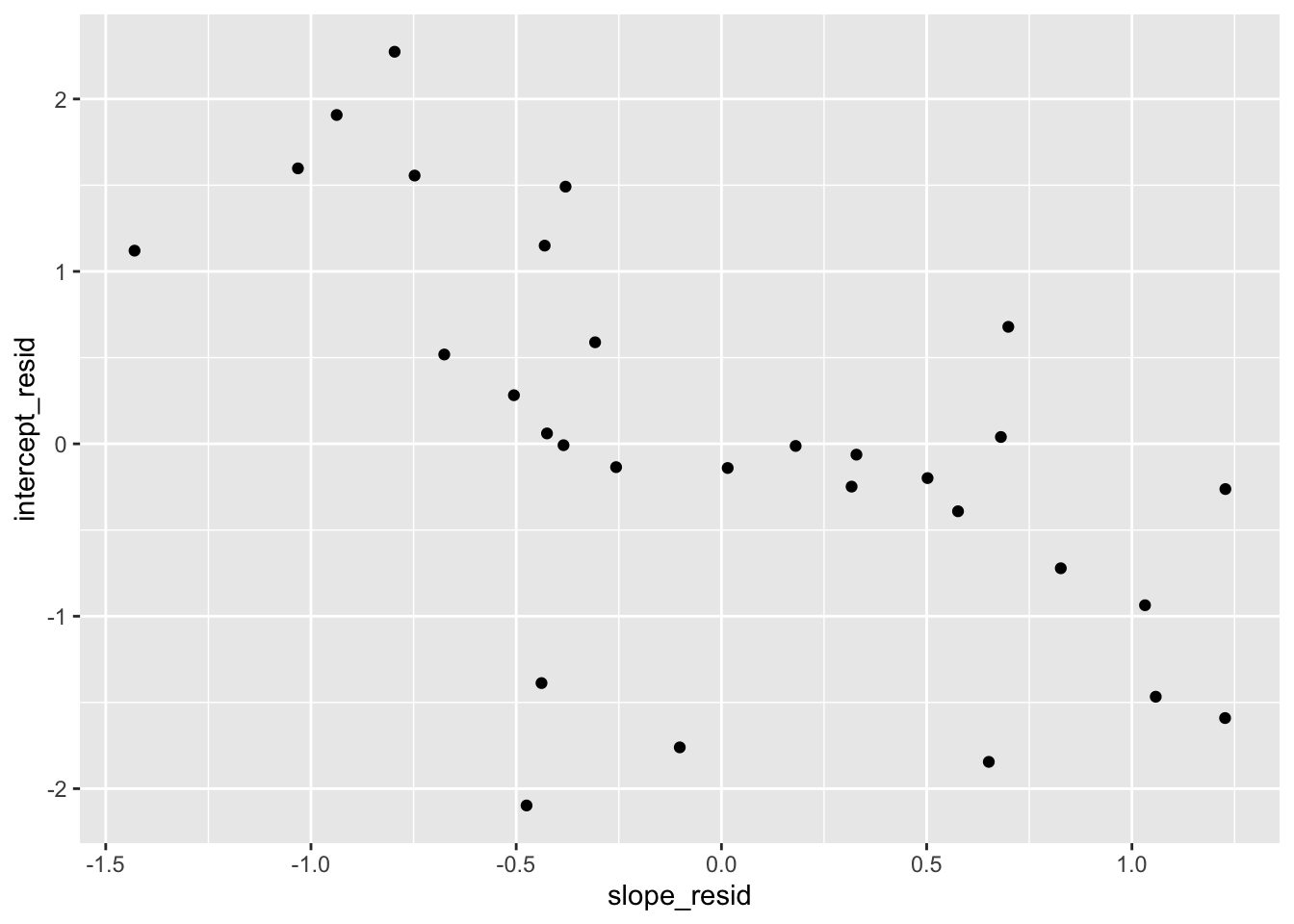 Our model assumes that intercept and slope residuals are independent, but that doesn’t seem to be the case. We could relax this by adding the covariance back in.

As we did with our level-1 residuals, we can check the normality of our level-2 residuals with histograms and QQ plots. First, intercept residuals: 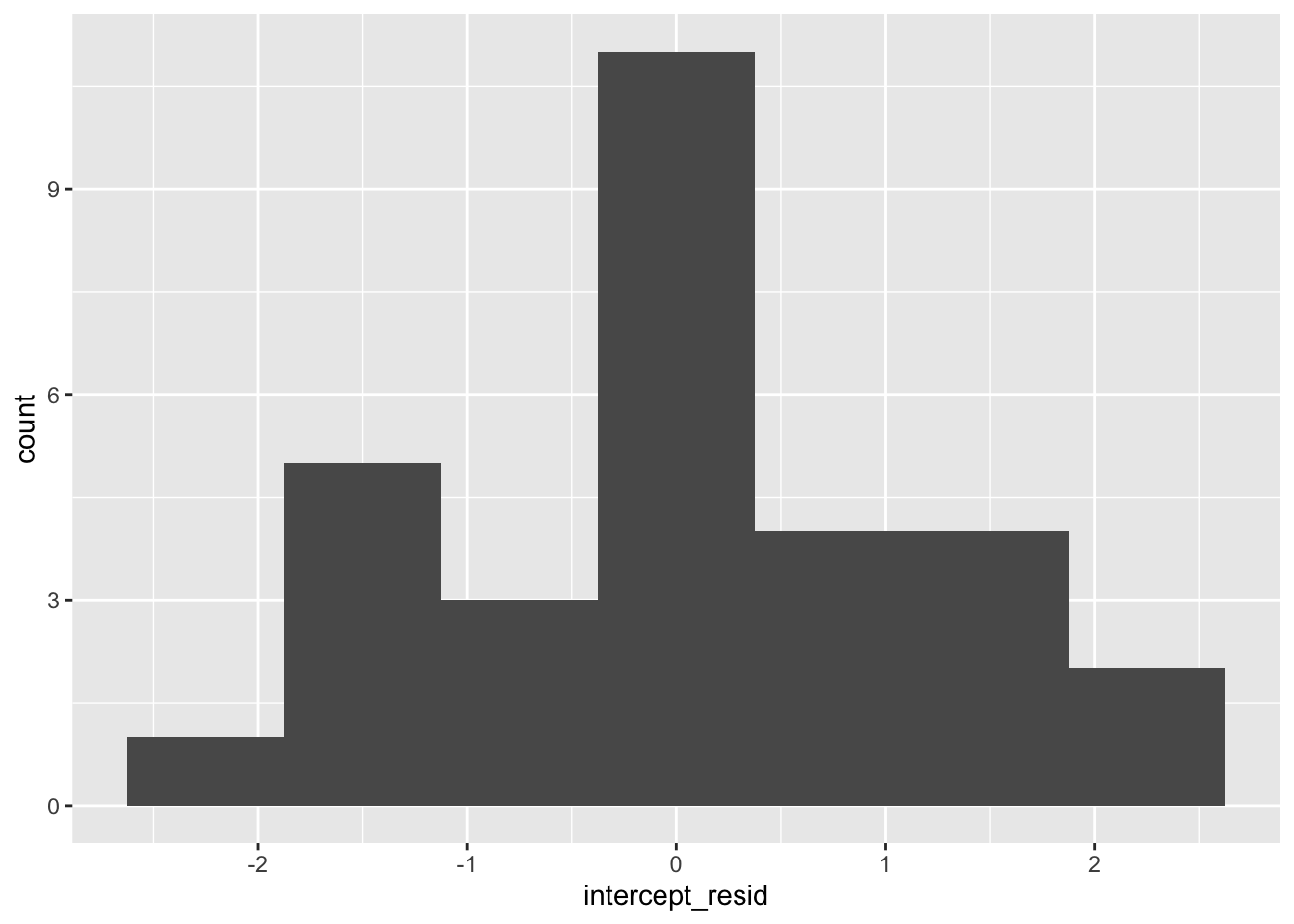 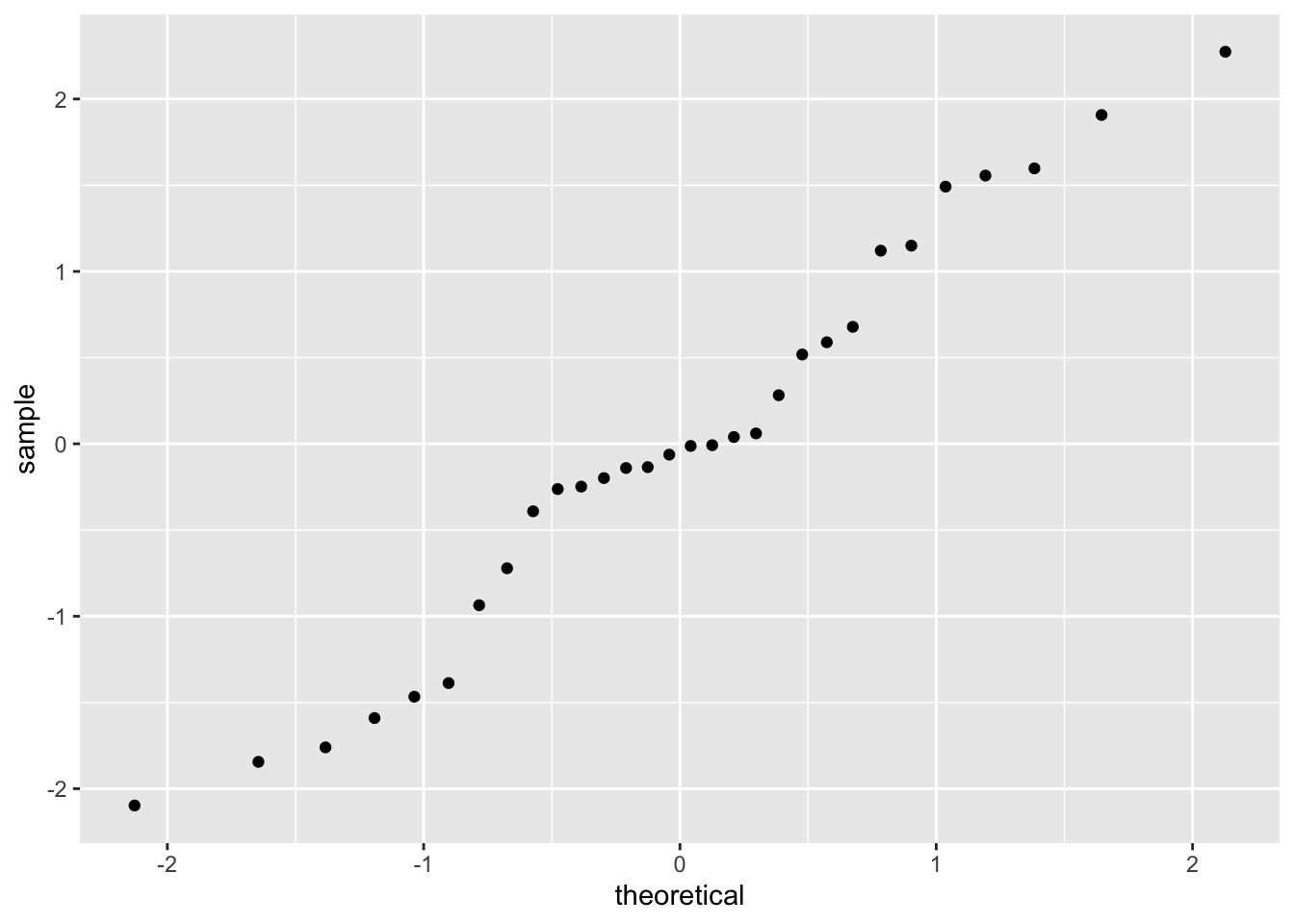 Those look a bit wonky. When residuals are not normal, the assumption that the data are random doesn’t hold, so that’s a big issue. You might need to revisit your sampling strategy or your model: are predictors missing? You can read more in Pek, Wong, and Wong (2018).

Next, our slope residuals: 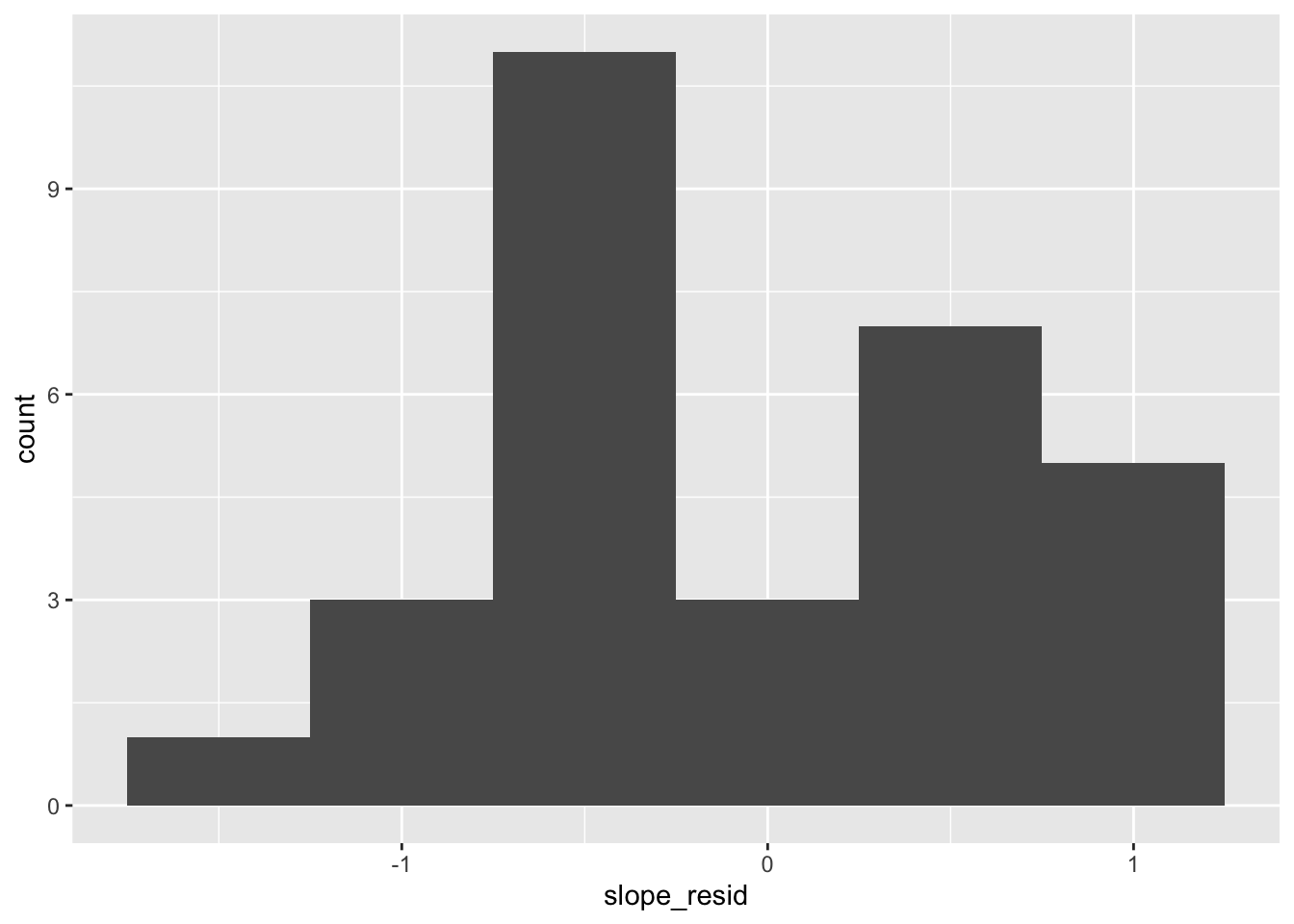 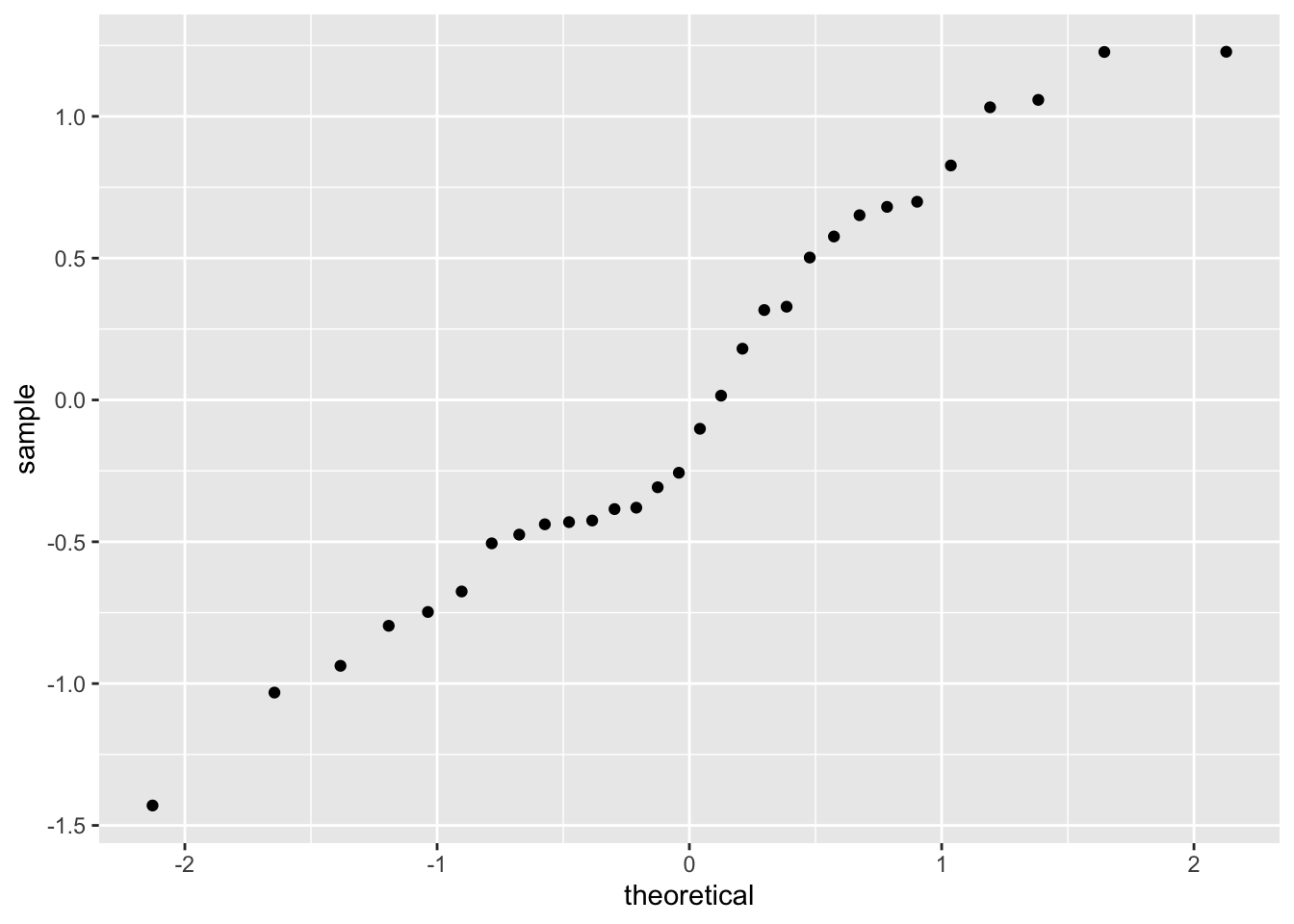 Our residuals at level-1 and level-2 should not be related to each other. We can check that with scatterplots and calculating correlations. To do so, we first need to add our level-2 residuals to our level-1 dataset. As mentioned, each school only has one level-2 intercept residual and one level-2 slope residual, but as many level-1 residuals as there are students in that school To add our level-2 residuals to the dataset, then, we need to replicate them X times, where X is the number of students in a school. For example, if a school has 10 students, we need to repeat the level-2 residuals 10 times. (This is how level-2 predictors are encoded, too: for a school with 10 students, the mean values of SES for that school repeats 10 times in the dataset.)

To do that, let’s use the replication function rep with the times argument to repeat each value X times. We can find the number of students per school as follows:

Then let’s create vectors of level-1 and level-2 residuals that repeat X times:

Now that we have a dataset with all of our residuals, let’s assess whether the level-1 and level-2 residuals are correlated with our trusty scatterplots and correlations. First, level-2 intercept residuals and level-1 residuals. 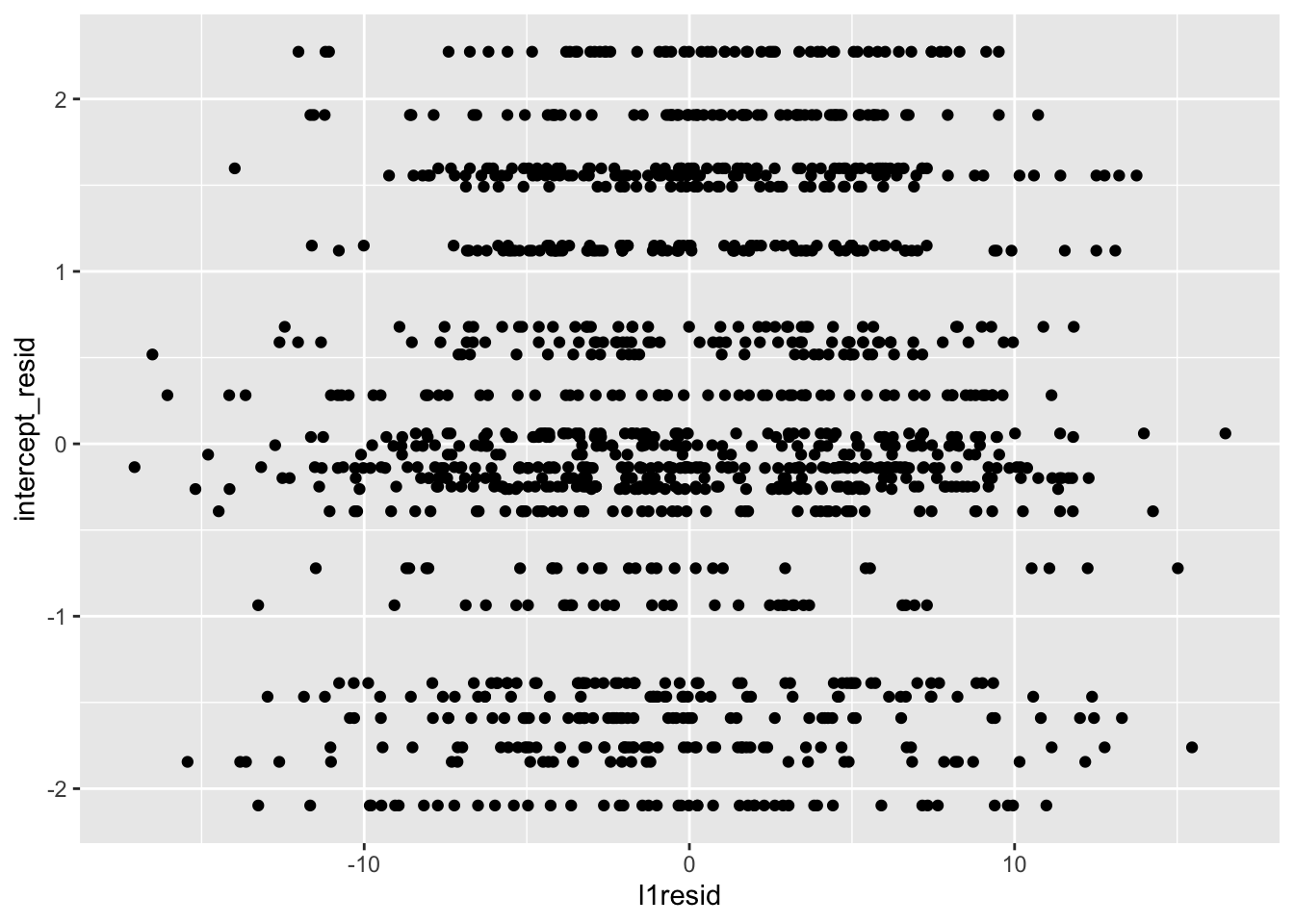 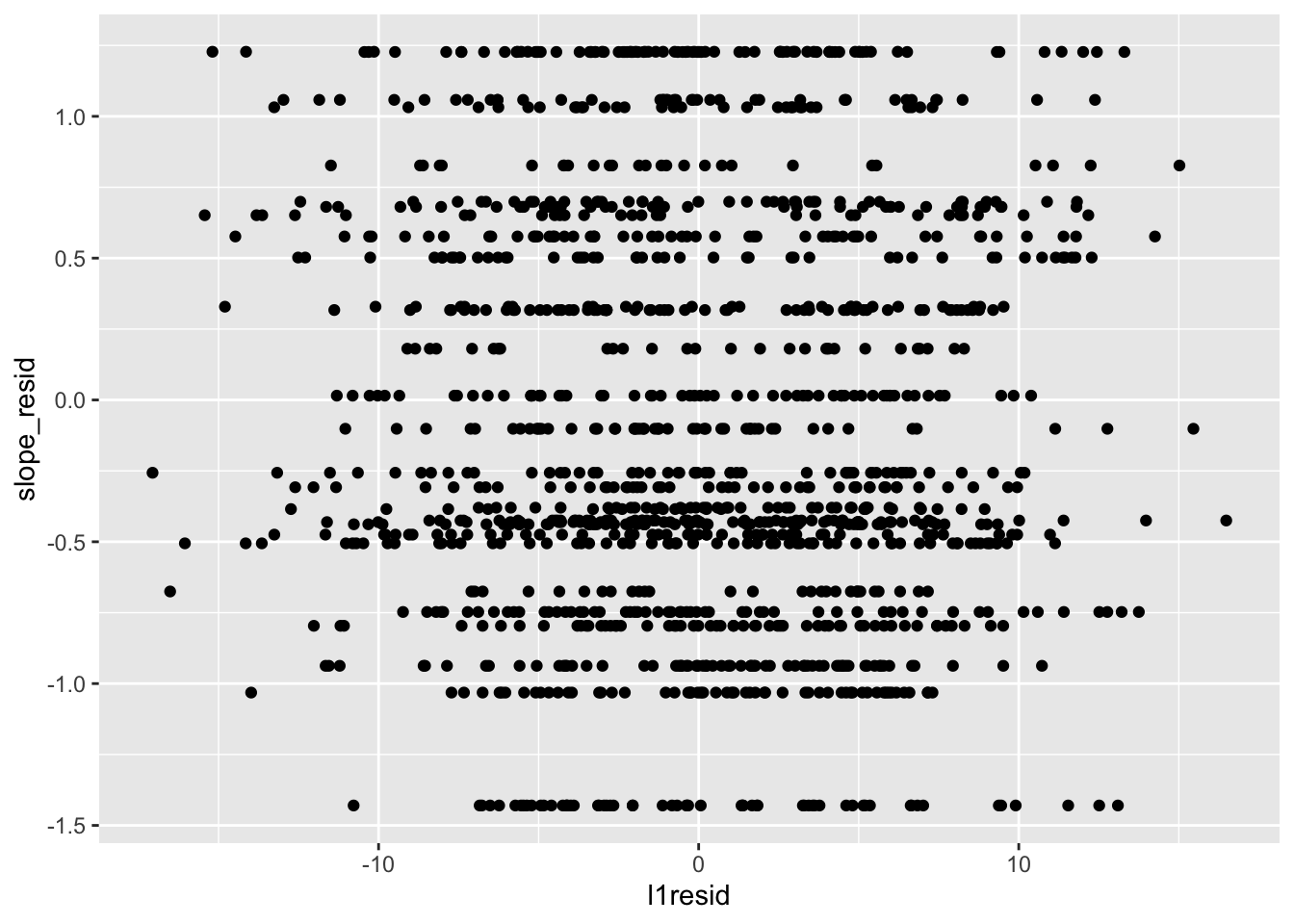 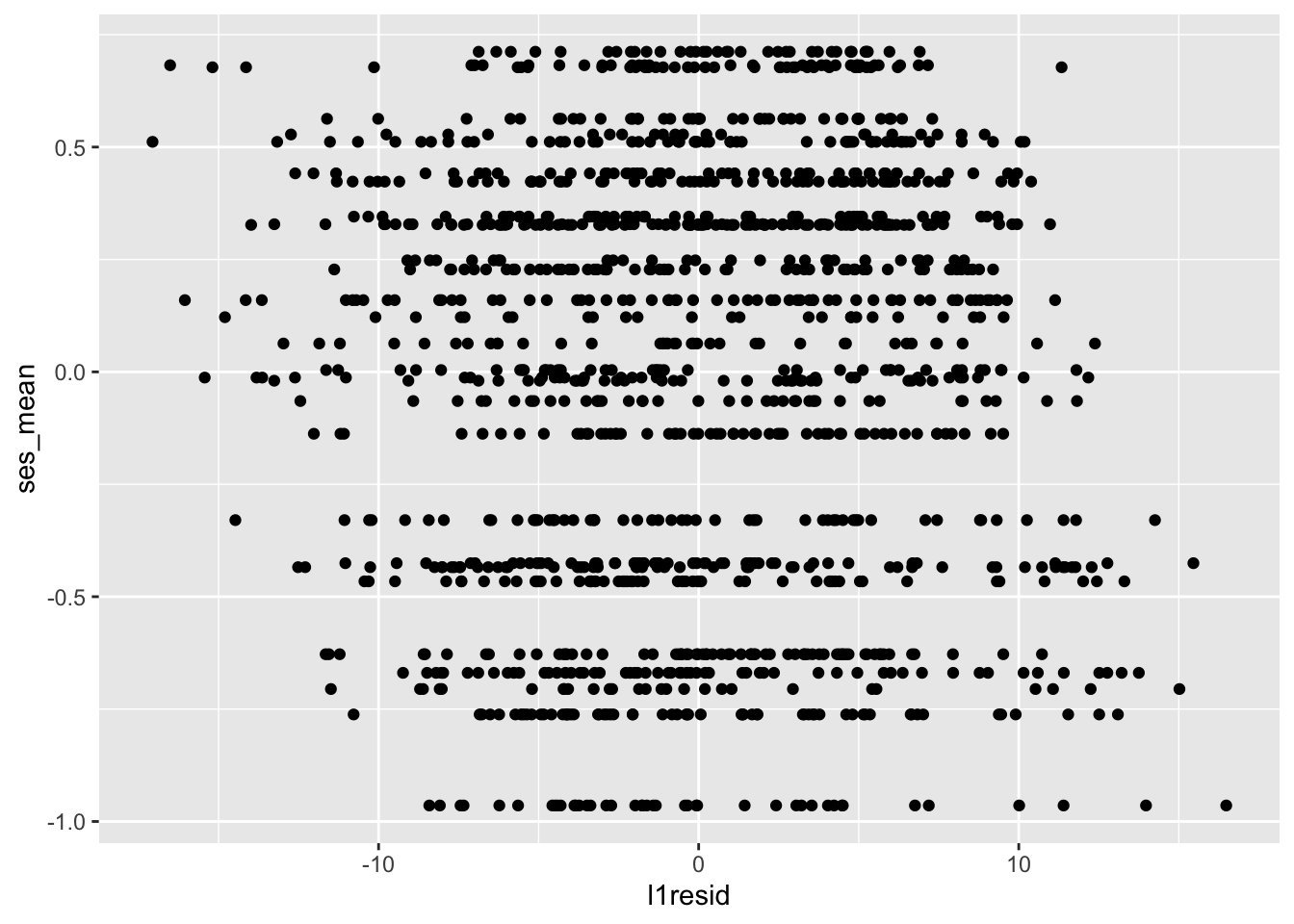 The scatterplot looks like there might be a pattern where lower values on ses_mean are associated with higher residuals, but the correlation belies this. 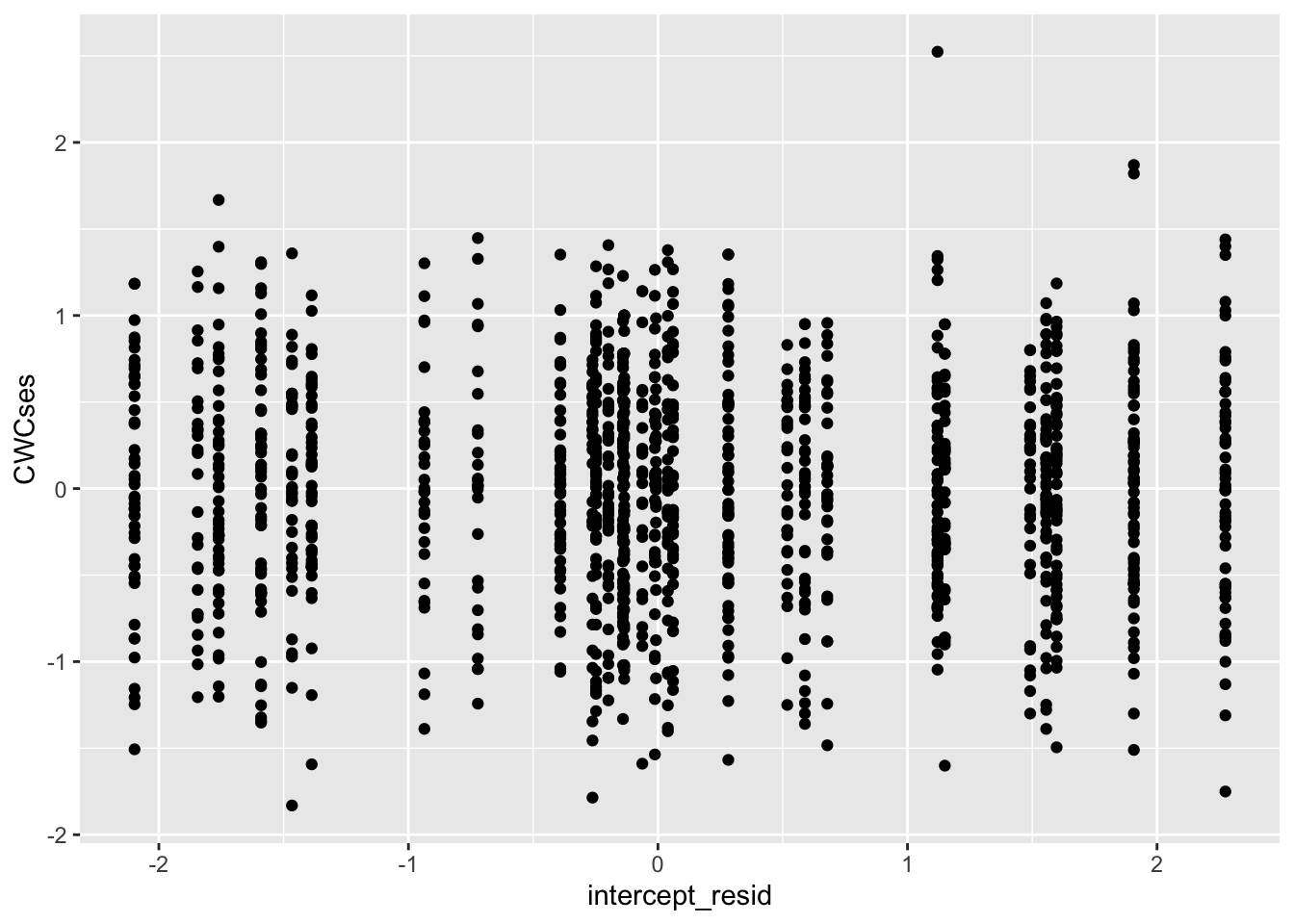 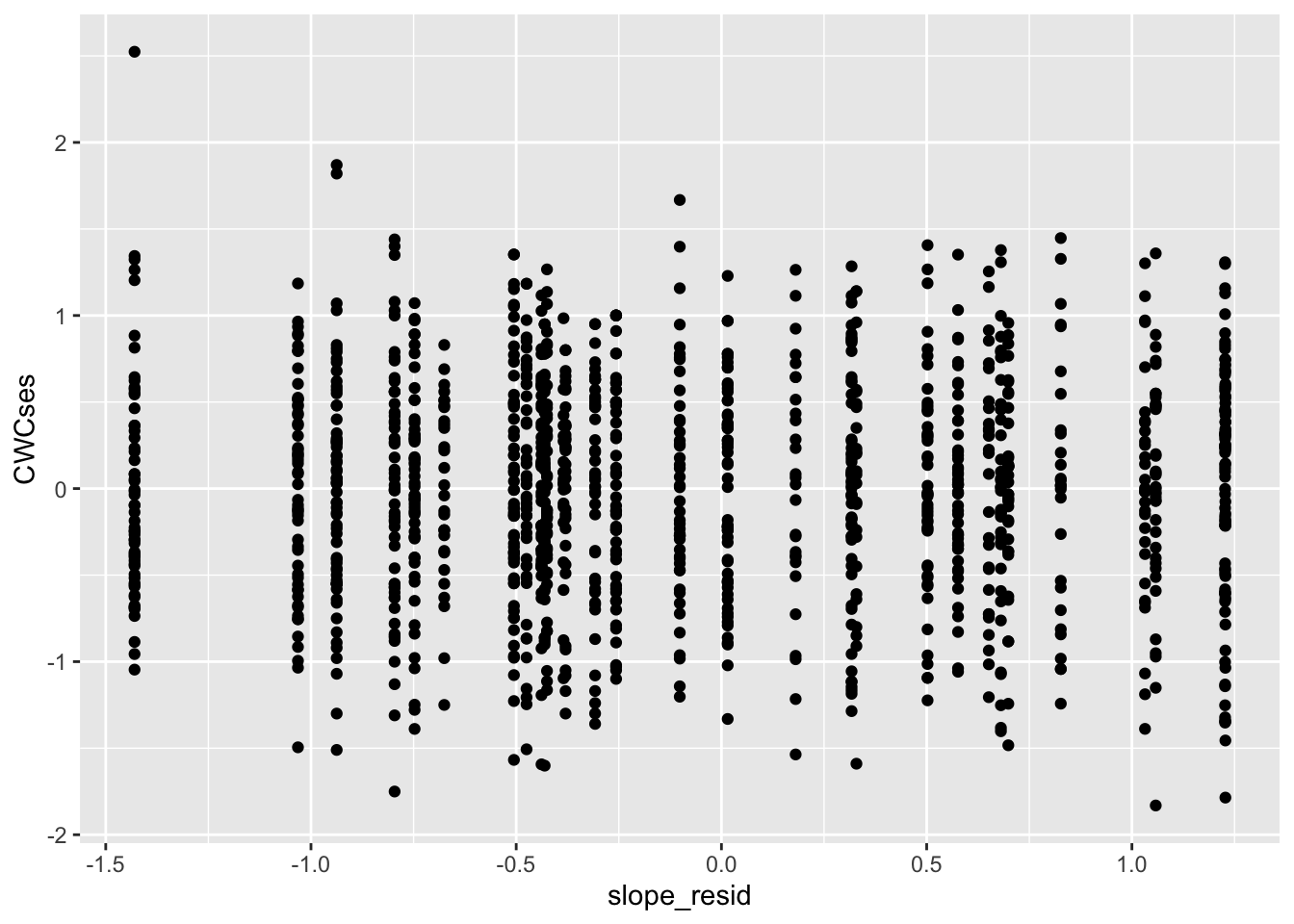 In this chapter, we reviewed the assumptions underlying multilevel models and examined some methods to assess them.

This is the last chapter of the book! We’ve covered the fundamentals: when and why you would use a multilevel model, models of varying complexity and completeness, and considerations as you build your models like estimation, various data structures, and interpreting effect sizes. Thank you for reading. If you have any suggestions or feedback, feel free to get in touch on Twitter (Mairead, Jessica) or on GitHub.