In this chapter, we will run our first multilevel model to account for the clustered nature of our data and begin visualizing and understanding the variance in our data.

The learning objectives for this chapter are:

All materials for this chapter are available for download here.

The data for this chapter were taken from chapter 3 of Heck, R. H., Thomas, S. L., & Tabata, L. N. (2011). Multilevel and Longitudinal Modeling with IBM SPSS: Taylor & Francis. Students are clustered within schools in the dataset.

For this data demo, we will use the following packages:

And the same dataset of students’ math achievement from chapters 2 and 3:

In chapter 3 we talked about cluster-robust standard errors, which handle clustering as a nuisance, but doesn’t investigate it as interesting or enable multilevel research questions. But if you’re interested in the clustered structure of the data, and you want to know how clusters differ or ask questions at multiple levels, you’ll need a multilevel model. To get a sense of how the outcome is clustered, let’s start by making some graphs. Our data set contains students clustered into 419 schools. For demonstration, we will take a subset of 10 schools.

In chapter 2, we created a scatterplot with math achievement (math) on the y-axis and socioeconomic status (ses) on the x-axis. Let’s re-create that graph and overlay a line of best fit, first ignoring the clustering. 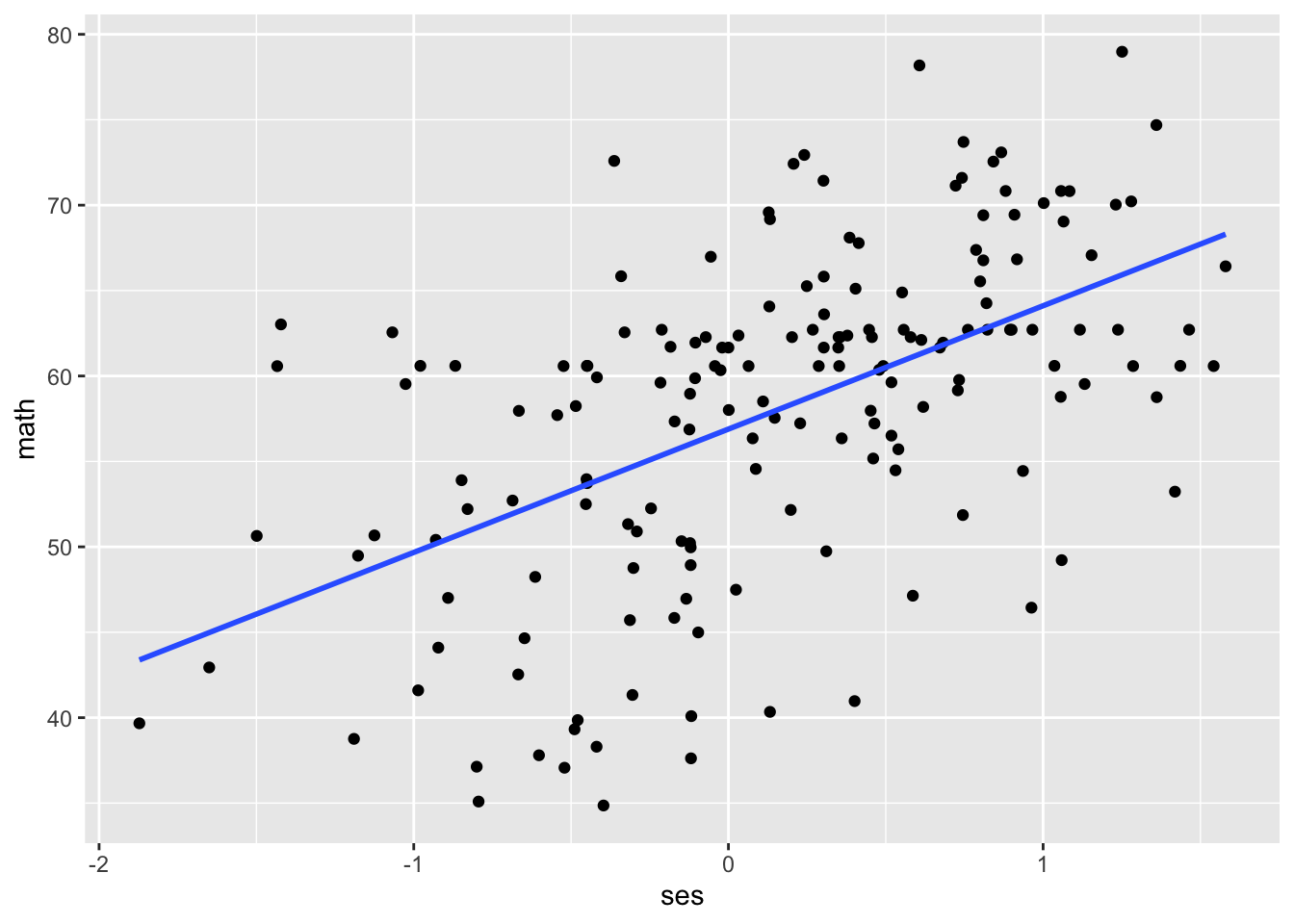 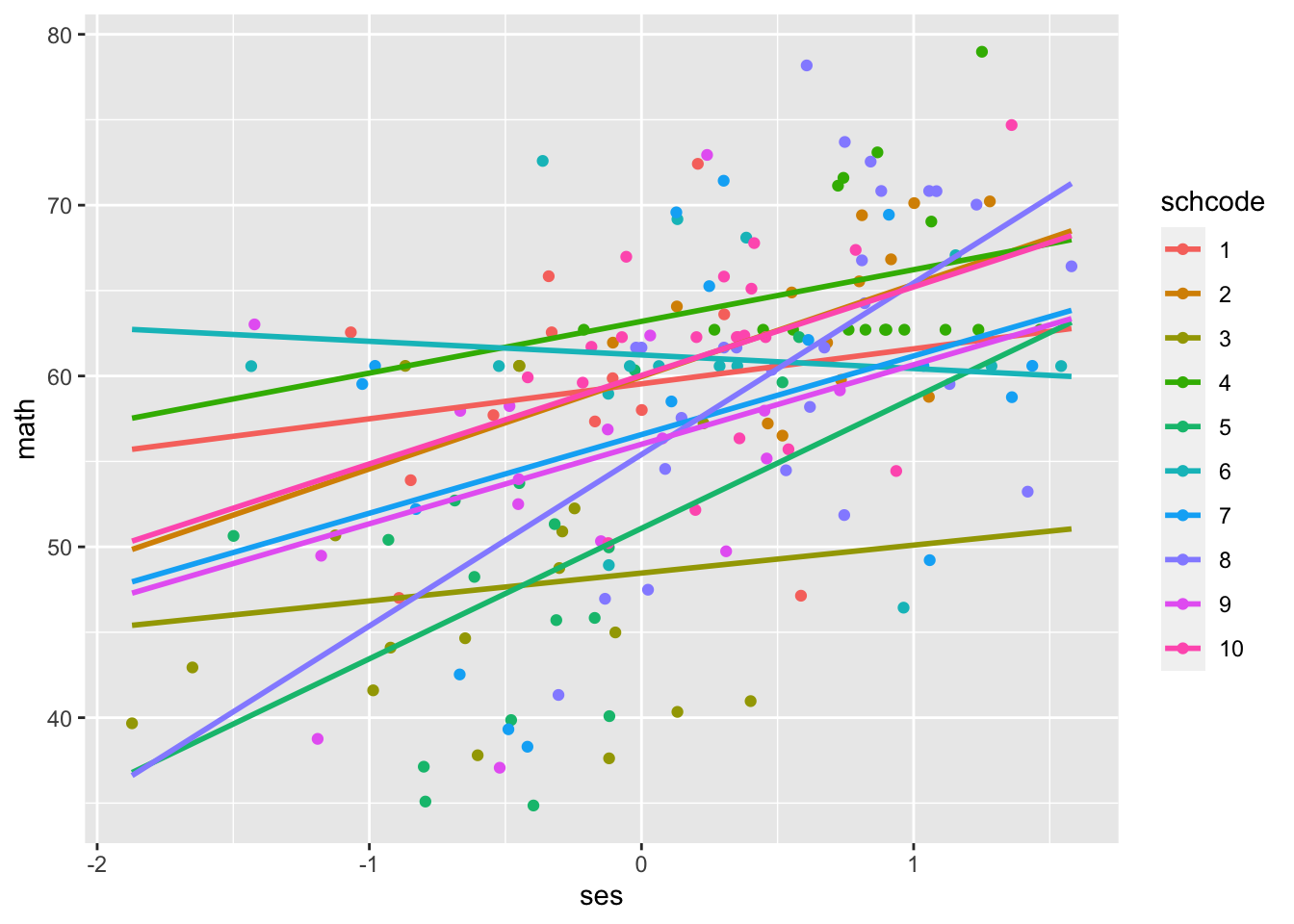 When we run a regular regression without accounting for the clustered structure of the data, we treat all schools as though they have the same intercept and slope. What do you notice about the intercepts and slopes for different schools?

The intercepts and slopes vary widely! For example, school 4 has an intercept around 62, compared to the intercept of school 3 around 49. School 8 has a relatively large positive slope, while school 6 has a slightly negative slope. With multilevel models, we can quantify this variance and ask questions about it.

In the simplest MLM we can run, we let intercepts vary between clusters by estimating random effects for the intercepts in addition to a fixed effect. The random effect allows the intercepts to randomly vary about the fixed effect, the grand mean of the intercepts. As a result, this model is called the “random intercept only model,” also known as the “null model.” For our example, math achievement is our outcome variable, and the equations for the null model look like this:

The key output to interpret is:

As indicated in our combined equation, we are estimating three parameters:

We can double-check we’ve counted parameters correctly using the logLik function from the stats package.

The degrees of freedom listed, (df = 3), correspond to the number of parameters we’re estimating. We’ll discuss log likelihoods a bit more in chapter 7, so ignore the other number for now.

The intraclass correlation coefficient quantifies the extent of clustering in a dataset. It ranges from 0 to 1 and is the quotient of the variance between clusters to the total variance: \(ICC = \frac{\tau_0^2}{\tau_0^2 + \sigma^2}\). The more extensive the impact of clustering, the more variance between clusters, the larger the ICC. The ICCs can also be interpreted as (1) the proportion of variance in the outcome that is attributable to clusters or (2) the expected correlation between the outcome from randomly selected units from a randomly selected cluster.

We can use the performance package to calculate this automatically:

Another way to understand the variance in our data is by calculating a 95% plausible values range for a given effect. For example, the intercept: given the fixed effect for the intercept (\(\gamma_{00}\)) and the variance of residuals around that fixed effect (\(\tau_0^2\)), we can describe how much the schools vary in mean math achievement by calculating a 95% plausible values range. \(95\%\ plausible\ values\ range = \gamma_{00} ± 1.96\sqrt{\tau_0^2}\).

This range gives us a sense of the variance in school intercepts: 95% of intercepts will fall between 51 and 64. 13 points of variance is a fair amount for a scale from 0 to 100! It seems good that we’re accounting for that variance with our multilevel model, rather than treating all schools like they have the same intercept.

As noted, every school has its own intercept residual, \(U_{0j}\). We’re not usually interested in individual residuals; rather, we’re interested in the variance of those residuals to understand the clustering in our data. But we can visualize at the individual residuals as a third way of understanding that variation. We can extract and plot the residuals as Empirical Bayes estimates, which are weighted. The random effects for the intercept (the \(U_{0j}\)s) are latent variables rather than statistical parameters, but we can estimate them to visualize how much they vary (and thus how much schools vary around the grand mean intercept). We can estimate a weighted intercept for a given group with the following equation:

To calculate the weighted intercept, we use the following information:

The Empirical Bayes estimate of a residuals, \(U_{0j}\), is then the difference between the fixed effect \(\gamma_{0j}\) and the EB estimate \(\hat\beta_{0j}^{EB}\). To develop an intuition about EB estimates, let’s manually calculate the residual for the intercept for school 1, or \(U_{01}\).

We can double-check our manual calculation:

Looks like the residual for school 1 (grp 1) is 0.87, just like we manually calculated! Then, we can plot the residuals to visualize their distribution.

As we would expect, the residuals have a mean of 0 because the process of estimating the model is a process of minimizing the residuals. It looks like they mostly range from -5 to 5 in a normal distribution. Again, looks like our intercepts vary fairly widely between schools, so it’s a good thing we’re modelling that variation.

In this chapter, we discussed why and when one should use multilevel models, reviewed different ways to visualize and understand the variance in your data at different levels, and estimated our first multilevel model: the random-intercept-only model (also called the null model). In the next chapter, we’ll start adding more fixed effects.